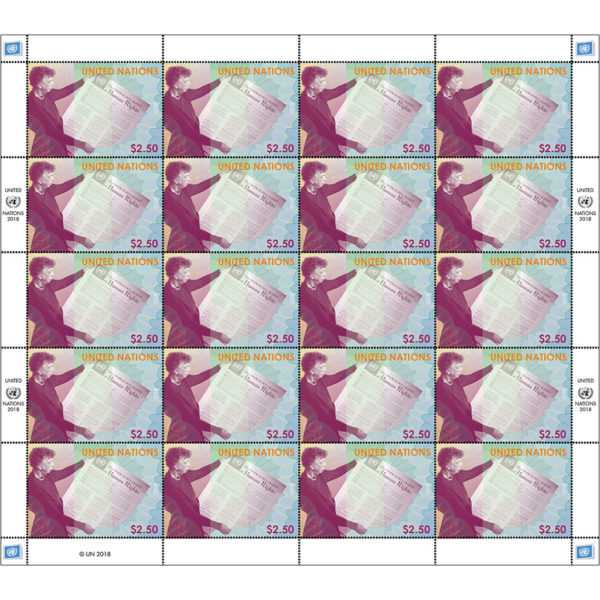 To highlight what the Universal Declaration of Human Rights means for people in their everyday lives, the UN Human Rights office is celebrating the 70th Anniversary of the Declaration in 2018 with a yearlong campaign.

Proclaimed by the United Nations General Assembly on 10 December 1948 and drafted by representatives of diverse legal and cultural backgrounds from all regions of the world, the Declaration sets out universal values and a common standard of achievement for all peoples and all nations. It establishes the equal dignity and worth of every person.

Thanks to the Declaration, and States’ commitments to its principles, the dignity of millions has been uplifted and the foundation for a more just world has been laid. While its promise is yet to be fully realized, the very fact that it has stood the test of time is testament to the enduring universality of its perennial values.

The US$ 2.50 stamp image features an image of Eleanor Roosevelt holding one of the original Declarations. Roosevelt was the first chair of the United Nation’s Commission on Human Rights and worked to the end of her life to gain acceptance and implementation of the rights set forth in the Declaration.