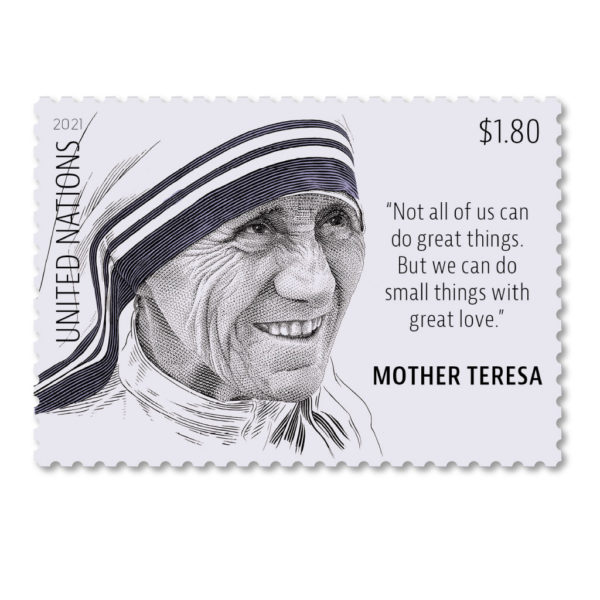 The quote on the stamp, which is in English, is as follows: “Not all of us can do great things. But we can do small things with great love.”

Mother Teresa, the renowned nun and missionary, was born Agnes Gonxha Bojaxhiu in Macedonia in 1910. Her family was of Albanian descent. At age twelve, she strongly felt the call of God and knew she wanted to be a missionary. At the age of eighteen, she went to India and devoted herself to the help of the destitute. In 1948 she became an Indian citizen and founded the order of Missionaries of Charity in Kolkota (Calcutta) in 1950, which became noted for its work to support the poor and the dying in that region.

For over 45 years she ministered to the poor, sick, orphaned and dying, while guiding the Missionaries of Charity’s expansion, first in India and then in other countries, including the construction of hospices and homes for the poor and the homeless.

Mother Teresa’s work has been recognized and acclaimed throughout the world. She received numerous awards and distinctions, including the Nobel Peace Prize in 1979 “for work undertaken in the struggle to overcome poverty and distress, which also constitute a threat to peace”.

Mother Teresa died on 5 September 1997, at the age of 87. The United Nations designated the 5th of September of each year as the International day of Charity, which is the anniversary of the death of Mother Teresa.