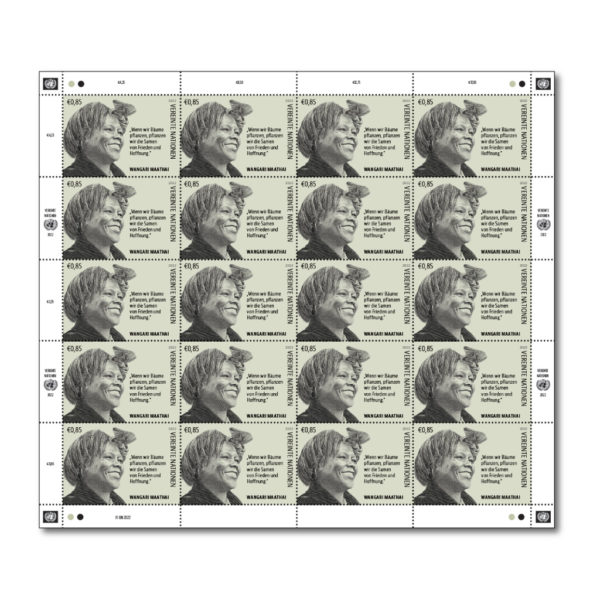 On 1 April 2022, UNPA will issue a definitive stamp to commemorate the birth anniversary of Wangari Maathai, who was born on 1 April 1940. The stamp features a quote in German: “When we plant trees, we plant the seeds of peace and hope”. The € 0,85 stamp is part of a series of definitive stamps illustrated by Martin Mörck (Norway).

Over many decades, Wangari Maathai actively contributed to furthering the ideals and goals of the United Nations. A globally recognized champion of human rights and women’s empowerment, Ms. Maathai was a pioneer in articulating the links between human rights, poverty, environmental protection and security. She was awarded the Nobel Peace Prize in 2004.

Born in Kenya, the daughter of farmers in the highlands of Mount Kenya, Ms. Maathai was the first woman in East and Central Africa to earn a doctoral degree. In 1977, she was appointed as Associate Professor of Veterinary Anatomy at the University of Nairobi and, that same year, she founded the Green Belt Movement. The grassroots environmental organization has assisted women and their families in planting more than 40 million trees across Kenya to protect the environment and promote sustainable livelihoods.

In recognition of her deep commitment, in December 2009, the Secretary-General named her a United Nations Messenger of Peace, with a focus on the environment and climate change – a role she carried out effectively and enthusiastically until her passing on 25 September 2011.