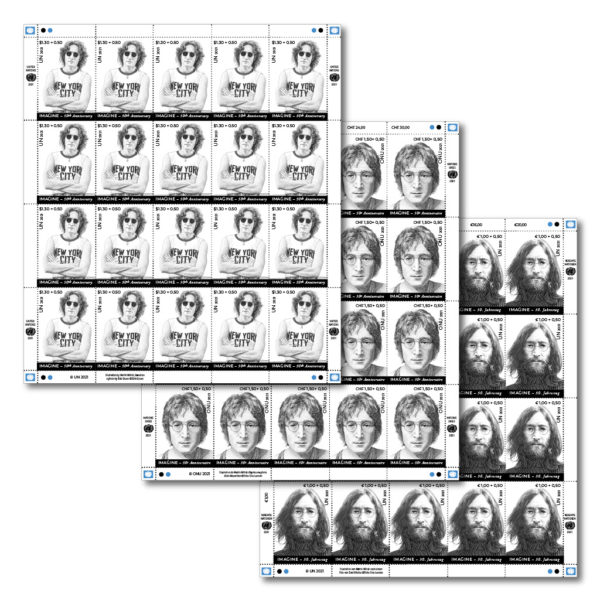 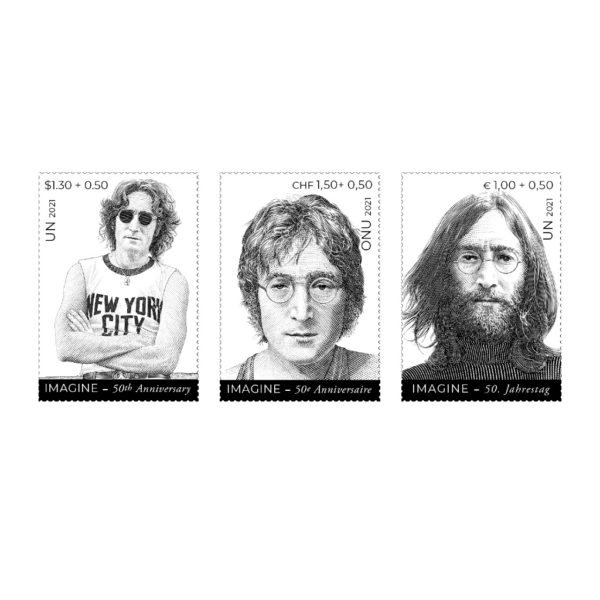 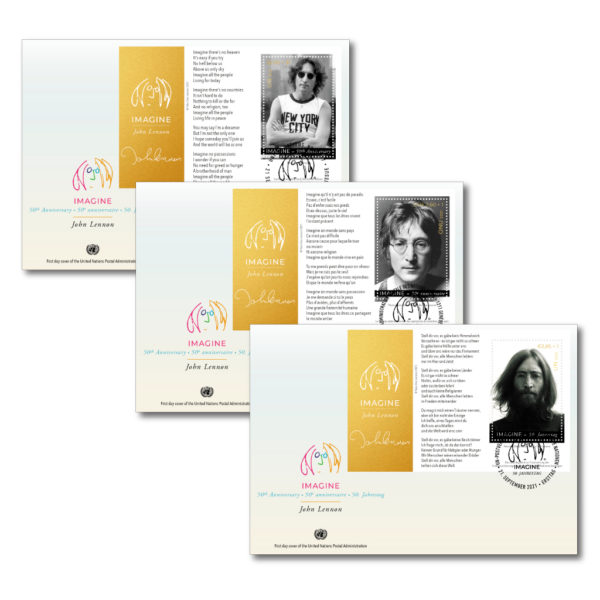 The International Day of Peace is observed yearly on the 21st of September. The United Nations has declared this as a day devoted to strengthening the ideals of peace, both within and among all nations and peoples. It is an occasion for all of humanity to put aside their differences and contribute to promoting a culture of peace around the world

The United Nations Postal Administration (UNPA) is marking this occasion with the issuance of three stamps ($1.30, CHF 1,50 and € 1,00) featuring the world-renowned peace activist and musician, John Lennon. Three special souvenir sheets ($2.60, CHF 2,60 and € 2,85) featuring the lyrics of the iconic song “Imagine”, John Lennon’s signature and his self-portrait will be released simultaneously.

The year 2021 marks the 50th Anniversary of the recording of “Imagine”. Released in 1971, the song, which is the most successful single of Lennon’s solo career, has been covered by artists in every genre around the globe. It has been performed at some of the world’s biggest events, including concerts for Peace, Hunger, New Year’s celebrations and at several Olympic Games – including the recent opening ceremony of the 2020 Olympic Games in Tokyo, Japan. The song “Imagine” has also been played as message of hope throughout humanity’s most troubling times in recent history.

The song lyrics encourage us to put aside all differences and unify to imagine a world of peace, without greed, without hunger, and without barriers separating people and nations. John Lennon’s message of peace, love, and goodwill, conveyed through his music, still resonates today.

We can best honour the International Day of Peace by standing up against acts of hate, and by spreading compassion, kindness and hope so the world can “live as one” – just as John Lennon imagined.

The stamps and souvenir sheets feature photographs by Bob Gruen (US$ value), Iain Macmillan (CHF value) and David Nutter (Euro value). The stamps were illustrated by Martin Mörck (Norway) based on actual photographs of the British Rock Star. The stamp issue was designed by Rorie Katz (United Nations).

A surcharge has been added to both the stamps and souvenir sheets, which will fund the United Nations Peacekeeping operations.

United Against Racism and Discrimination